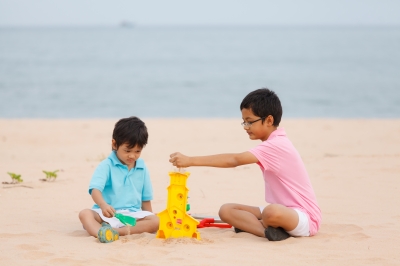 When you have one child, you often face a specific opinion. Your in-laws, parents, friends, and perfect strangers are only too happy to tell you: your only child needs a brother or sister.

Does he? If your toddler refuses to share a toy or take turns, you can sense judgment. Even if the person doesn’t say the words, you know what he or she is thinking: “If that child had a sibling she wouldn’t behave this way.”

One anonymous reader even stressed this in a comment to an earlier blog post. “Having at least two children benefits in that the child has companionship, learns how to cooperate with others at a very early age, and develops important interpersonal skills that come of learning how to communicate with others within the safety and acceptance of the home environment.”

All too frequently, people feel a sibling is essential. Many believe only siblings teach a child social skills such as sharing, taking turns, and getting along with others. That may have been true when families lived great distances from each other and the term “play date” was absent from the vernacular. Today, children socialize very early. There’s day care, nursery school, and pre-kindergarten. Play dates abound at the youngest ages. In those six to eight hours an only is in daycare or pre-school and beyond, he cultivates myriad skills. He learns to share, get along with others and compete-lessons similar to those he might learn from siblings.

Toni Falbo, Kokyung Soon, and Dudley Poston at the University of Texas re-analyzed results from a 1990 study in China of 4,000 primary school children in grades three and six to help determine if siblings offer beneficial experiences in terms of character development and interpersonal skills. The results, discussed in “Playing Well with Others in China: The Benefits of Having No Siblings at Home,” were compiled from ratings by parents, teachers, and the students themselves. Falbo’s study was, in part, to compare the results of a 2004 American study of kindergarteners. Then, Douglas Downey looked at social skills. He found that, when evaluated solely by teachers, only children scored lower than kindergarten children with one or two siblings in sociability. In both studies, only children had an advantage in school achievement.

The true factor in shaping behavior

Among other measures (different in the American and China studies), Dr. Falbo’s “Playing Well with Others” analysis looked at two things. One was cooperativeness (not a trouble maker, easy going, appreciative, honest, respects elders). The other: sociability (helping others, sharing, involved in group activities, sympathetic, not selfish). He found interesting results in Beijing, the province with the largest concentration of onlies in the study. Overall, Falbo found no positive effect of having one or more siblings in terms of cooperativeness and sociability here. There were some difference in the other provinces.

It seems the real differences, be they in China or America, may have more to do with parents’ circumstances. For example: parents’ education and income, and parenting strategy. And in this country, a few only-child stereotypes are rearing their heads when it comes to evaluating social skills.

Falbo examined the stereotypes-and told Brain Child magazine “the Chinese only child who’s fat, bratty, badly behaved, and does not play well with others-and found it didn’t stand up…[and] they’re not more likely to get their way [than children with siblings].”

According to Kokyung Soon in a separate presentation, “Siblings as Interpersonal Resources? Only Children in China,” to the American Psychological Association, playing with children in the neighborhood had a positive effect on children’s cooperativeness. Setting up those play dates for your singleton can further insure good interpersonal skills.