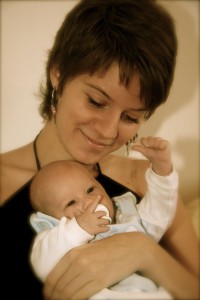 Once upon a time, “starting a family” required that a woman wait for a worthy man to marry her before she had any children. Nowadays there isn’t a singular, accepted path to motherhood. Some women get married and have babies. Some move in with a partner and have them. Some adopt. Some have babies with several partners. And, increasingly, some have babies all on their own. Currently about 18% of mothers under 40 had their babies while single, often by choice.

Should women bother waiting for their dream guy to become mothers? Arguably not. With age, fertility challenges are greater. And women can enlist relatives and friends and those with well-paying jobs can hire help to share the child-rearing responsibilities. Some women understand and prefer that the responsibility will be fully theirs.

Society still hasn’t fully accepted single mothers. Many of the women I’ve spoken with said that society expects them to have a partner. Although negative views of single mothers have decreased over the years and with each new generation, 64 percent of adults still say the growing number of children born to unmarried women is a problem.

A bold step into motherhood

In spite of the stigma, a growing pool of women bravely makes the leap to motherhood on their own. Many of them seek support, advice and friendship in their endeavor at Single Mothers by Choice (SMC) a national support group founded in 1981 by psychotherapist Jane Mattes, author of Single Mothers by Choice: A Guidebook for Single Women Who Are Considering or Have Chosen Motherhood and herself a single mother. The group was such a success that it now has local groups across Europe, Canada and the United States. Mattes says that 75 percent of single mothers responding to her survey conceive using a sperm donor, 25 percent adopt, and that has always been the case since she founded SMC.

In addition to easy access to donor sperm, improved fertility procedures have extended the window of opportunity for childbearing and women are taking advantage. Three women friends, Carey Goldberg, Beth Jones, and Pamela Ferdinand, in their late thirties decided it was time to have a baby. None was married, nor were any suitable men in their current dating pools. One purchased eight vials of sperm that eventually got passed down to each of them, but remained unused as one by one they found partners and became pregnant. Their joint memoir, Three Wishes: A True Story of Good Friends, Crushing Heartbreak, and Astonishing Luck on Our Way to Love and Motherhood, reveals the urgency of wanting to be pregnant, the complexity without a mate, and the lengths they went to. Not everyone is as lucky as Pamela Ferdinand and her friends.

“This isn’t what I dreamed of,” my friend I call Andrea told me. She is single and five months pregnant via sperm donor insemination which as she says, “thankfully ‘took’ the first time.”

Andrea joined SMC and also takes childbirth and parenting classes. However, she has to explain her choice to most people — even to those teaching the courses. “There is an expectation that you have a partner or spouse who will show up at some point. I have to ask if I can bring a friend,” says Andrea, who will be forty-years-old when her daughter is born.

Unlike pregnant, unmarried celebrities we see looking glamorous with their “baby bumps” and ample resources for full-time nannies, Andrea realizes that being a single parent will not be easy as a working mother with a modest salary. “I have to line up child care and will be leaning on friends to help me figure out the trickier parts of parenting.”

In the twenty-first century, women feel empowered, many with stable, satisfying jobs. Educated women like Andrea are sensible enough to know that being a parent isn’t always enthralling and at times will be overwhelming. And still Andrea and many others who have made the same choice say, “It’s the best decision I ever made.”

Andrea is hoping to meet Mr. Right someday, but she’s not waiting for him to have the child she has always wanted. I admire Andrea’s determination and grit.