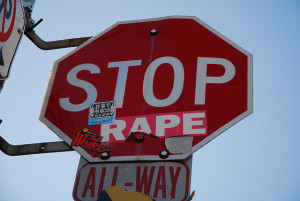 One of every six American women has experienced rape (completed or attempted), yet few of the incidents ever get reported. If you followed the courtroom activities a few years ago during the Steubenville, Ohio rape trial in which two high school football players were convicted of raping a 16-year-old girl at several end-of-the-year parties, it’s easy to understand why so few women come forward.

After the evidence is presented, questioning often turns to attacking the alleged victim’s credibility. In this case, how much had the teenage victim had to drink? Could she remember the events of the evening? Was she known for lying?

And then when attacking the victim got old, defense attorneys turned the spotlight to the parents of the students who hosted the parties. Why weren’t they there to prevent the rape?

This tendency to try and place blame for rape anywhere but on the rapist speaks volumes about our society’s attitudes towards women. It is clear that many men and, as this case reminds us, boys in our macho culture do not respect women. These teens were just one more example of the pervasive belief that women and girls are sexual objects to be used and abused.

In the Steubenville case, the victim bravely took the stand for more than an hour. She was subjected to a barrage of questions trying to insinuate that she somehow brought the rape upon herself. As it is in most rape trials, the burden fell on the female to prove her innocence, rather than where it should be — on the boys and men who rape and assault women.

At least in this example the victim’s public humiliation in the courtroom led to consequences for the perpetrators. Trent Mays, 17, and Ma’lik Richmond, 16, will both serve time in a juvenile detention center for at least a year (Mays will serve an extra year for having uploaded nude pictures of the victim to the Internet.). But often times in our sports culture, particularly in towns like Steubenville where football teams are revered and its players celebrated, it is easy to lose sight of the fact boys and men should be held accountable. In this case they were. However, jail time is not the solution for this epidemic cultural problem. The answer lies in changing male attitudes about women, starting when boys are young, whether or not they ever play sports or become super stars.

During a series of media interviews, Zerlina Maxwell, a rape survivor and advocate for changing this culture where males are blameless, offered a five-point plan to teach boys to respect girls and women and not to rape.

(An expanded version is in Ebony Magazine):

These messages should be part of conversations with our sons and repeated frequently. They should be part of school sex education or health programs. Society must move away from exalting tough guys and sports heroes and blaming the victims.

The Steubenville case centers on high school boys, however, most boys today go on to college. Sexual assault is a major issue in higher education circles including our elite colleges and universities: Harvard reports it, too, has a problem. And in March, Princeton released survey numbers. The headline: “In 2008 survey, 1 in 6 female undergraduates reported non-consensual vaginal penetration.”

I don’t believe the outcome of one trial will change centuries of attitudes toward women. Where women are concerned, we need to reeducate boys who will become men.