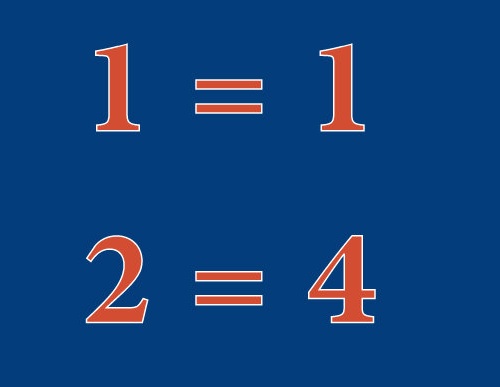 When it comes to children, it sometimes feels like one is one, two is four…

Deciding whether or not to add another child to your family is a difficult decision for many. To parents of singletons who aren’t sure how an addition will impact your family, consider this oft-repeated phrase: “One is One, Two is Four…”

Kevin D. Arnold, Ph.D., a clinical faculty member in the Department of Psychiatry at Ohio State University and an older father, spoke about a feeling of overwhelm among parents of multiple children: “If you have more than one child, don’t add the numbers, square them.”

The “Rule of Squaring”

According to the Pew Research Center, “When Americans are asked what is the ideal number of children for a family, the most popular answer, according to the survey, is ‘two’ — as it has been since the 1970s.” While Americans aspire to having two children, more and more families around the world seem to believe the “Rule of Squaring,” as Arnold named it.

Nations like China and England are already referred to as one-child nations. Many other countries—Japan, Portugal, Italy, France, Germany, Spain, for instance, have extremely low birth rates. Thirty percent or more of families in some of these countries have one child. And, in major US cities like New York City, one-child families are at or approaching 30 percent.

It isn’t shocking news. It’s pure and well-documented logic, that as family size grows, mothers, more so than fathers, face additional housework and child-care responsibilities. In many instances, this means more disagreements with spouses.

When you add another child, you potentially add one more “thing” to pull you in different directions. It makes demands on your time and emotions and, in general, drains your energy.

According to a Pew Research Center study titled “The New Demography of American Motherhood,” when men and women were asked why they limited their family’s size, 56 percent of women and 40 percent of men said the reason was the stress of raising children.

The University of California at Los Angeles conducted a three-year study of middle-class families with two children and both parents working. They found that daily life consisted of “a fire shower of stress, multitasking and mutual nitpicking.”

Elinor Ochs, a linguistic anthropologist and the study’s lead author, said, “The coordination it takes, it’s more complicated than a theatre production…And there are no rehearsals.”

The study’s conclusion about the two-child model family: “Stress is the tie that binds.” The study also showed that moms continue to spend more time on household chores because of the extra strain. (27 percent, versus fathers who spent 18 percent of their time on household tasks).

Researchers of one study published in Family Relations examined the sources of marital conflict in the home. They found almost 40 percent of a couple’s disagreements revolve around children. Couples argue about behavior, discipline issues, differences in parenting style and childcare. If you include household chores and family responsibility, tack on another 25 percent.

On a positive note, some things are changing. According to a study titled “The National Study of the Changing Workforce 2008: Times Are Changing: Gender and Generation at Work and at Home,” younger fathers now spend almost two hours more per day with their children than they did thirty-odd years ago.

Families today need to understand the benefits and acceptability of having only one child. Especially if they fear another mouth to feed will strain resources and compromise happiness, it’s worth a consideration.