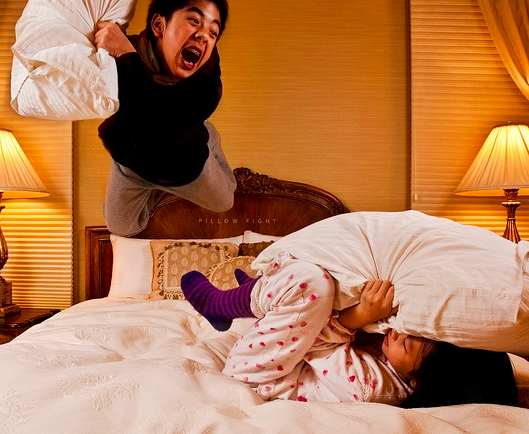 For decades, ever since a TV-Land mom walked in on her children pillow fighting amid a cloud of flying feathers, “Calgon, take me away!” has been an iconic lament of hyper-stressed, overworked, and put-upon people everywhere. It is no coincidence Madison Avenue chose the image of an overwrought parent to depict a blood pressure-soaring scenario, and to emphasize the importance of finding an appropriate way to maintain sanity when one arises. They knew that every parent and child caregiver would instantly relate. For some households, staying calm is a distant prospect.

These are just a few of the inevitable flashpoints parents may face on any given day. Since in the real world we can’t magically float away in a gigantic soap bubble, like the lucky Calgon mom, we all lose it occasionally, especially when we’re tired or pressed for time. Tales of parents and caretakers losing their patience and taking it out on the children in their charge are too many.

A National Study of Parents, Children and Discipline in Britain reports that only one in 10 parents believes that physical punishment is “always” acceptable, yet 70 percent admitted to hitting or other minor physical punishment at some point during their children’s childhoods.

Smacking a child, for example, may stop a behavior at the moment, but is harmful long-term and can destroy the relationship as well as tell a child that it’s fine to hit someone smaller than he is. Often it is not the child’s actions, but rather the parent’s feeling out of control that creates the response.

Years ago my son threw beets at our beige curtains an hour or so before company was due. Although extremely displeased, I spoke to him sternly, then laughed. Like the parent whose child flushed her money down the toilet, more than two decades later, we make a joke about the fact that my son still won’t eat beets. He could have just told me. While not humorous at the moment, upsetting incidents call for a sense of humor—can be your best friend—not a parental outburst.

Fortunately, there are steps parents can take to minimize or avoid the likelihood of over-reacting, remain in control when at the tipping point, and do damage control following those occasions when the situation and children’s shenanigans get the best of us. It is important to step back before lashing out, regain perspective and make sure your reaction “fits the crime.” Bear in mind that anything that hurts or scares a child is going too far.

How to avoid a parental meltdown

1. Take a few deep breaths, step back, and count to 10. Use the time to consider if it’s actually the child you are angry with and not someone else, perhaps even yourself. And for those who believe spanking or hitting is legitimate discipline, remember that experts broadly agree one must never strike a child in anger.

2. At some point during the day, get away from the house for exercise, a superb way to relieve stress. Make it a habit to take the children for a walk, to the YMCA or a playground where they can wear themselves out a bit. Many gyms provide childcare while parents work out.

3. Meet friends during the day with the children, be they in strollers or walking. Conversation with peers offers a change of scene and, for most, a brighter perspective.

4. Take short breaks from care giving responsibilities whenever possible. Staying calm is often built upon a solid self-care foundation. Grab some downtime of your own during children’s naps or independent play. If you can safely do so, step away from the children to chill out. Brief respites act as safety valves and restore energy so you are less likely to blow if things go wrong.

5. Set up “on-call” support for times you’re reaching your breaking point. When you feel your blood pressure rising there’s still time to avert a crisis. Talking to a friend or family member who understands your children lets off steam. It also gives you a different perspective and the chance to gather your wits. This can be especially important if your child is particularly difficult or has a special need or disability.

6. Arrange for relief—a spouse, relative, neighbor, or baby sitter—at “the witching hour,” the hours when children are most challenging. Pre-dinner, for example, is frequently a bottleneck. It’s one of the times you’re most likely to lose your temper because you’re trying to keep children amused and fix dinner. By then you’re probably exhausted and the children are hungry and cranky. If feasible, tag-team when your partner walks in by handing over responsibility for the kids.

7. Focus on what your child has done right if the situation allows. Don’t ruminate on the judgment error he or she has made.

If you lose your temper and go overboard in a reprimand, own up. Apologizing to your children is a great way to role-model taking responsibility for a mistake. Your children will respect you for it and are likely to say, “It’s okay, Mom.”